Published on June 1st, 2015 | by Supworldmagazine

Australians set the #SapinusPro alight as all six athletes from Down Under progress through to Round 2. Kai Lenny Knwocked out…

It certainly was a day for the Australians as all six of the crew from Down Under advanced into the Round 3 of the SapinusPro on Day 1 of the Main Event. Kai Bates (Fanatic) was the first to progress in Heat 4, showing maturity in bigger surf with some solid turns the youngster picked off the best waves in what was a slow heat to ease through to Round 3.

With the waves picking up in the next heat, Keahi De Aboitiz (JP Australia) wowed the watching crowd in the channel with a huge snap off the lip for his second wave to take Heat 5 and go straight through to Round 3.

Justin Holland (Starboard) looking hungry as ever and wanting to better his fourth place at Stop 1 in Sunset Beach, Hawaii. Holland dropped into his second wave and tucked into a deep one, pulling in and grabbing rail he was rewarded with an 8 and sending Noa Ginella (Naish) & Julien Bouyer into the Repechage.

James Casey (JP Australia), Dave Muir (IOPS) & Beau Nixon (Naish) all needed the Repechage to progress to Round 3. Beau Nixon surfing under his new board sponsor was stoked with how his boards were working for him “I’m happy that I got through, I was the last Aussie waiting to get through so to be honest I just wanted to make it 6 into Round 3. huge turn secured the top places in Heat 18 to progress to the next round.

4x World Champion Kai Lenny knocked out in Round 2

With a beautiful morning in Tahiti the 2015 #SapinusPro Main Event was called on with the swell on the rise from overnight, conditions were similar to the previous days pumping swell. Athletes were able to let lose of some of the finest waves this beautiful island chain in the South Pacific produces.

Kai Lenny was looking for his second Tour win of the season after taking out #Stop1 of the #SUWT at Sunset Beach back in February. Tahiti in French Polynesia is a location that has eluded Kai in the past and proved to be his nemesis once again in 2015. Going out in Round 2 Kai Lenny said “I just didn’t read the waves very well, this is a tough location to come too. I guess I will have to take this as my throw away”. Going down in Round 1 the Hawaiian had to pick himself up and battle it out in the Round 2 Repechage to try and progress. The 4x World Champion just could not produce the quality of turns or find any barrels to land those excellent scores that the judges were looking for.

Zane Schweitzer scores the highest wave of the day

Zane Schweitzer (Starboard) scored the biggest single wave of the day (9.5) with two critical turns and then getting a cover up the Hawaiian showed his week of training here in French Polynesia was paying off.

Noa Ginella shows why he is one of the best sup barrel riders on the planet.

Noa Ginella (Naish) found the deepest barrel of the contest so far in Round 2, to impress the judges who rewarded him with an (8.6) and knocking out fellow team rider and Hawaiian Kai Lenny in the process. The North Shore youngster showed real class in finding good waves but fell short in Round 1 behind the in form Justin Holland. The Naish rider showed real style in the Repechage and effortlessly dropped into the deepest barrel of the contest to show why he is one of the best sup barrel riders on the planet.

Airton Cozzolino shows Italian flair to progress to Round 3

Italian Airton Cozzolino (Fanatic) showed he is a force to be reckoned with as he sent Kai Lenny through to the Repechage and hit one of his best scores on the SUWT.

Airton who is more familiar kiting in bigger waves has defintely been putting time into his Stand Up and that is clearly showing. Airton tucked into one and managed to get a quick in and out before the section closed out held on to complete the wave.

Round 3 is stacking up with a wealth of talent ready to do battle tomorrow. South African, Tom King (Coreban) stormed Heat 3 and will take huge confidence ahead of the Man on Man Rounds. Local Tahitian favourite Poenaiki Raioha (F-One) needed the Repechage round to progress but still will be looking to take home advantage in his tie against Airton. Sean Poynter (Starboard), Caio Vaz (Art in Surf) & Bullet Obra will also be ones to watch out for as the action steps into over drive tomorrow for Round 3.

Make sure to keep up to date with everything from the #SapinusPro atwww.watermanleague.com 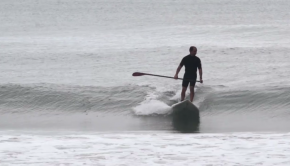 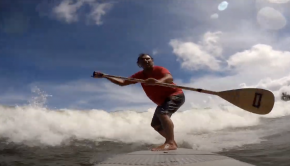