Super sweet photo montage showing the Caballito de Totora differents use, and how they are made. Caballitos de totora are reed […

Stand Up Paddling and Surfing with Roller Blades in Santa Cruz

Not all Dogs are Meant to SUP

Not all dogs are meant to SUP. During a quick visit home, I took one of the family dogs out [… 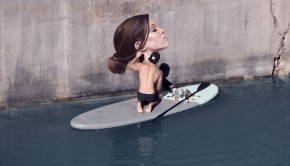 Artist Sean Yoro (aka HULA) Paints from his Sup Board

How cool is that?!?…New York based, Hawaiian artist (also surfer…) Sean Yoro (aka Hula)  paints from his Sup Board to […

Mike Tavares Paddling With His Dog Shredder, Cruising in Florida!

Sweet Video of Mike Tavares fooling around and paddling with his dog Shredder, while cruising around in Florida! By: Mike Tavares

Big Adventure Day, over 20 adventure in one day!

It all started with stand up paddling… Follow Canoe Freestyle Worlds bronze medalist, Jez Blanchard (Australia) through the craziest day of his […

Check out Starboard Athlete Dan Gavere and Harmony Dawn on a snowy hill with their Starboard Astro Stream board, killing boredom while […