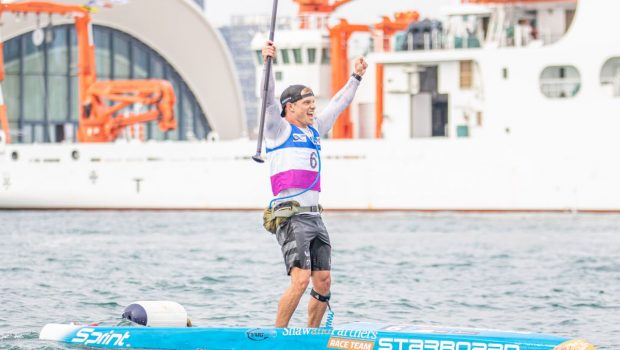 Published on October 25th, 2019 | by Supworldmagazine

Australia’s Michael Booth and Germany’s Sonni Honscheid had to call on all their experience in tough racing conditions in China to become the first ICF stand up paddling world champions on Friday both winning the Long Distance Race.

Strong winds made the race a challenge for the top international field. Several of the athletes described the conditions as ‘brutal’, forcing Booth and Honscheid to dig deep to wear down their closest rivals.

Booth came to Qingdao with a long list of SUP titles to his name, and looked to put his stamp on the ICF long distance race from the start. But it took him well into the final circuit of the three-lap race to see off the challenge of Hungary’s Hasulyo brothers, Bruno and Daniel.

“I had a really good race, I just stayed in there, I didn’t lead too much, but led enough to be still pulling enough to see what the guys were doing.

“Daniel and Bruno raced absolutely fantastic, and I had to throw my dice right at the end there and I just got away. But I knew if I made just one mistake, Bruno would have got me.

“I nearly had a fall right there at the end, and that would have been it. You want these moments, you want to win, and I’m just really happy to have got it done on the day.”

Bruno Hasulyo finished second, 13 seconds behind booth, with brother Daniel a further 20 seconds back in third. 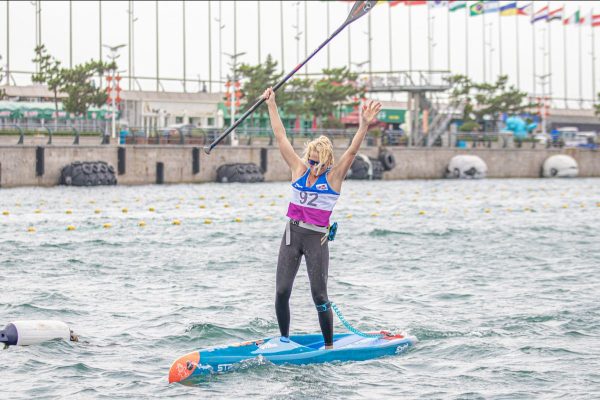 The rough racing conditions caused carnage in the women’s race, with almost half the field unable to finish. But the turbulent ocean suited Sonni Honscheid, who found herself leading for most of the race.

Only France’s Olivia Piana was able to hold on to the German, but when Honscheid popped the question on the final lap, the Frenchwoman was unable to match the challenge.

“I still can’t believe it, I think it has to sink in still, I feel like I’m floating in the clouds,” Honscheid said.

“It was a great race, I had a lot of fun, I felt strong all the way. I was looking back quite a few times, because anything can still happen, even in the last few metres of a race you still can make a mistake. I almost fell one time, so I really just had to focus on myself.

“Just coming here to Qingdao, and paddling in this place, there is a very special energy.I really enjoy paddling on the open ocean. I’m not the sort of person who likes to race in small places. I still love it as much as the first day I started.”

The 2019 ICF SUP world championships continue on Saturday with the men’s and women’s sprint races and inflatable races.