Published on April 16th, 2014 | by Supworldmagazine

After 3 days of intense action at Wadi Adventure Park in the UAE, it all came down to one final heat: 3 lefts, 3 rights and 3 closeouts as 3x World Champion Kai Lenny (Naish) from Maui stepped it up a gear to secure his first win of the season here at the Abu Dhabi All Stars Grand Slam. The final was one to remember, as the 2 on form surfers of the event, Sean Poynter (Starboard) from Florida and Kai Lenny (Naish) battled it out to the bitter end, going wave for wave in the completely unique format that the Abu Dhabi All Stars provides.

Despite considering himself weaker on his backhand, Kai rode 2 flawless lefts to start off the exchange, with scores in the excellent range, making it a chasing game for the on form Sean Poynter, as Sean attacked the rights and closeouts with everything he had to achieve the 9.27 he needed to take the win. But it all came down to a last wave of Sean to get the score, as Kai waited for his last wave and turns of the event. In the end, Sean’s score was not enough, as Kai executed a perfect air reverse into 360 by way of a victory lap before getting carried out of the pool by his team mates. A great result for the 3x World Champion after a disappointing finish in Brazil, relighting his competitive fire as we move into the World Series component of the Abu Dhabi All Stars Grand Slam.

Sean Poynter (Starboard) was without doubt the on form surfer of the event, posting some of the highest scores of the event through all his heats, linking critical and controlled turns together for an explosive display of progressive Stand Up Paddlesurfing. In the quarters, he took down fellow teammate and Abu Dhabi All Star in 2013, Zane Schweitzer, before dispatching the young phenom Mo Freitas (Focus SUP) in the semis. In the Finals, he put up a good fight, but didn’t find the flawless form he had had through the event, unable to match this year’s Abu Dhabi All Stars Champion.

Mo Freitas (Focus SUP) put on a clinic of full rail surfing here at this year’s Abu Dhabi All Stars, driving full power turns off the bottom through the lip, and carving roundhouses like no-one else. He made it all the way to the semis, only falling short by the smallest of margins to Sean Poynter (Starboard). Once again, a real testament to his potential on the World Championship Tour – at just 17 years old, he has a bright future ahead of him.

Caio Vaz (Art in Surf) put on a stellar performance throughout the event, with progressive surfing propelling him through the rounds, only falling short to Kai Lenny in the Semi Finals (Naish) by 0.23. Coming off 2 back to back wins on the Stand up World Tour at Sunset and then in Brazil, Caio kept his momentum and with a 3rd place finish here at the All Stars, is still sitting on top of the world with 2 firsts and a third. An impressive scoreline in his campaign for a World Title in 2014, as we hit the midpoint of the year and every point starts to count.

Other standouts of the event included Zane Schweitzer (Starboard), Abu Dhabi All Star in 2013, who fell to team mate Sean Poynter (Starboard) in the quarter finals, but also 2nd place finisher last year, Ian Vaz (Art in Surf), narrowly missing out on advancing through against Mo Freitas (Focus SUP).

Kody Kerbox (Naish) continued his great form this year, taking out Keahi de Aboitiz (JP Australia) in Round 3, but just falling short to Caio Vaz in he quarters, and Poenaiki Raioha (F-One) from Tahiti once again demonstrated his incredible talent, getting all the way to the quarterfinals only to come up against eventual Champion Kai Lenny (Naish). In a last hail Mary, Poenaiki pulled off an impressive air reverse into 360, getting the crowds to their feet, but it was not enough to take down Lenny, who advanced on to win the contest.

So that is a wrap for Stop #3 on the 2014 Stand up World Tour, as we celebrate an epic showdown out here in the desert of Al Ain, as history was once again made at Wadi Adventure for the Abu Dhabi All Stars Grand Slam, as the first Official International World Championship event was brought to the UAE for a spectacle like no other. Make sure to stay tuned to www.watermanleague.com for highlights, recap, galleries and much more as well as for the live broadcast for the World Series Racing event starting tomorrow, Thursday 16th April at Yas Marina. 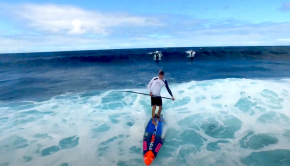 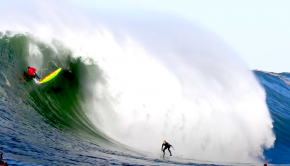 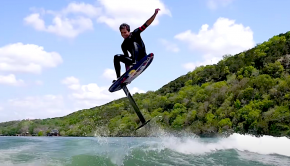