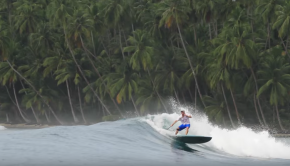 Check out former pro whitewater kayaker Luke Hopkins ripping it up on his sup board on Skookumchuck, an amazing tidal […

Surfing legend, Dave Kalama tells us in this video why for him Long Boarding style SUP Surfing is actually still awesome! Enjoy and […

Australians set the #SapinusPro alight as all six athletes from Down Under progress through to Round 2. Kai Lenny Knwocked […

One of the most surreal days we’ve ever had in the water. Joined by a pod of dolphins for around […