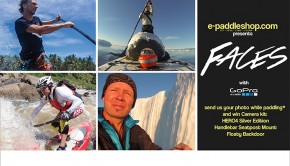 FACES is a new online event organized by Sup World Mag, presented by E-Paddleshop.com, and powered by GoPro The concept is […

#PADDLEFACES – Welcome to the FACES Contest

FACES is a new online event organized by Kayak Session Publishing, presented by E-Paddleshop.com, and powered by GoPro. The concept […

History was made today at Pipeline in celebration of the 50th Anniversary Duke Kahanamoku Invitational, as the Da Hui Backdoor […